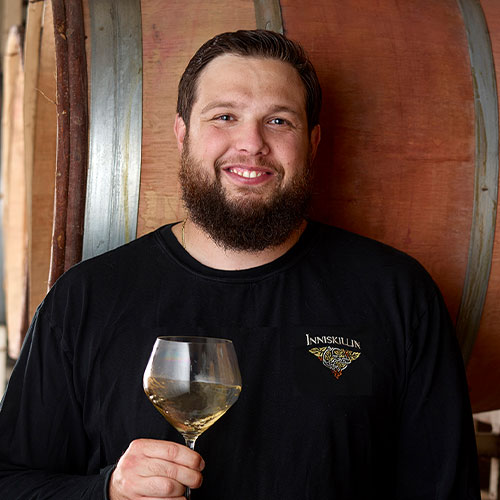 Nicholas Gizuk’s love for science, the outdoors and creative spirit garnered him an interest in wine at a young age.

Born and raised in Welland, Ontario, Nicholas’ parents are both avid wine lovers, and his grandfather made wine at home every fall. Him and his family would visit both Niagara-on-the-lake and the Beamsville Bench regularly. Nicholas enjoyed spending time outdoors and has always had a keen fascination with biology and chemistry.

In 2003, Nicholas earned an Honours Bachelor of Science degree at The University of Guelph. Through studying various food science courses available, it was fermentation and chemistry that captured his interest and passion.  With this passion, Nicholas entered the Niagara College Wine and Viticulture program in 2009 where he honed his winemaking and tasting skills. He landed his first internship at Rosewood Estates Winery in 2010. After graduating from Niagara College with Honours, Nicholas worked an extended harvest at Flat Rock Cellars before his journey continued to the Barossa Valley in Australia and Marlborough, New Zealand for two harvests. He credits this time as an eye-opening experience, where he gained an appreciation for southern hemisphere winemaking.

In 2013, Nicholas took a harvest internship with Inniskillin Estate Winery in Niagara-on-the-Lake, and it was clear from the start that he was a perfect fit for the iconic winery. From 2013 to 2021, Nicholas trained under the guidance of world-renowned, award-winning winemaker Bruce Nicholson. In 2017, he was promoted to Assistant Winemaker, where he assisted in crafting all table wine varietals as well as Icewine production for the Niagara Estate.  In the summer of 2021, Nicholas was promoted to the role of Estate Winemaker at Inniskillin Niagara.

Nicholas’ winemaking philosophy is about making varietally true wines, allowing the soil and sense of place to be expressed through each unique and iconic wine made. “We must respect the fruit and terroir, as that is the foundation of every great wine,” says Nicholas. “Our job, as winemakers, is to guide those grapes with as little intervention as possible into the bottle.”