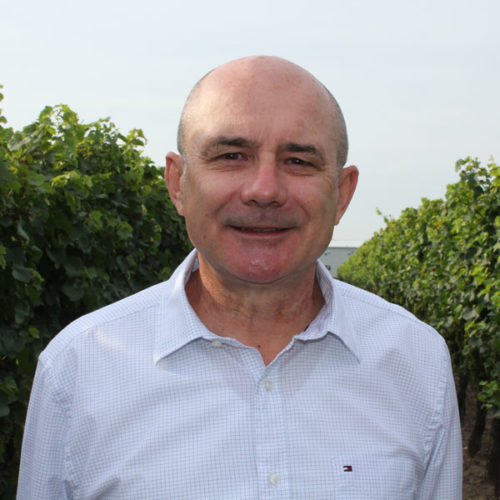 As a founding partner of Cave Spring Cellars, Angelo Pavan has guided winemaking at Cave Spring Cellars for more than three decades, crafting wines of authentic character and sophistication from the fruit of the Niagara Peninsula’s Beamsville Bench and surrounding sub-appellations.

A passionate and gifted winemaker with a comprehensive understanding of viticulture in Niagara, Angelo has helped to pioneer winemaking from noble European grape varieties in Ontario.

His efforts have established Cave Spring as one of Canada’s most acclaimed wineries, earning it a reputation for crafting elegant and distinctive cool-climate wines.

For Angelo, the vineyard is always paramount in winemaking. His oversight of the expansion and diversification of Cave Spring’s estate vineyards over the past four decades is precisely what has fueled his passion for creating wines that authentically reflect their terroir. Angelo’s influence extends far beyond the winery’s century old cellars. His commitment to making fine wines that represent the unique characteristics of the Niagara Peninsula has helped build the region’s reputation as a globally recognized wine appellation.

As a founding member and Chair of the Vintners Quality Alliance (VQA) Standards Development Committee, Angelo has played a key role in determining the most suitable winemaking practices applicable in Ontario. Also, as the founding Chair of the International Riesling Experience, held in conjunction with Brock University’s Cool Climate and Oenology Institute (CCOVI), he has been instrumental in solidifying Niagara’s place as one of the world’s pre-eminent Riesling producing regions.

Angelo is often invited to speak at industry symposia and universities across North America and Europe to share his knowledge and perspective on winemaking in Niagara. Angelo has also contributed to training and mentoring Canada’s next generation of winemakers, many of whom have started their careers at Cave Spring and progressed into senior positions within the Ontario and British Columbia wine industries. Over the years, Angelo has received many awards in recognition of his significant influence on the Ontario wine industry. In 2018, he was presented with the inaugural Winemaker of Excellence Award by Brock University’s Cool Climate Oenology and Viticulture Institute (CCOVI) for his major contributions to the Province’s wine industry, on-going commitment to excellence in winemaking and mentorship of young winemakers. In addition, Angelo was the proud recipient of the VQA Promoter-at-Large Award in 2012 for his efforts in generating public awareness about Ontario wines, and was named Winemaker of the Year at the Ontario Wine Awards in 1999.

Perhaps the greatest recognition that Angelo has earned over the decades has been his enormous contribution to the establishment of Riesling not only as the signature variety of Cave Spring, but also as the grape responsible in large part for the emergence of the Niagara Peninsula on the international wine stage. From New York to London to continental Europe, the world’s top wine critics have consistently and justifiably praised Angelo’s wines as testament to the enormous potential for quality winemaking in the Niagara Peninsula.